While the next playtest requires a little more time, there are a number of bugs that we wanted to squash before the holiday season. To address these, release-20181215 is now available with the following improvements:

Head over to the download page to grab the new release, and spread the word!

In other news, we are pleased to announce the first public alpha of the Krush Kill ‘n’ Destroy remake, which aims to rebuild and improve the first two KKnD games using the OpenRA game engine. 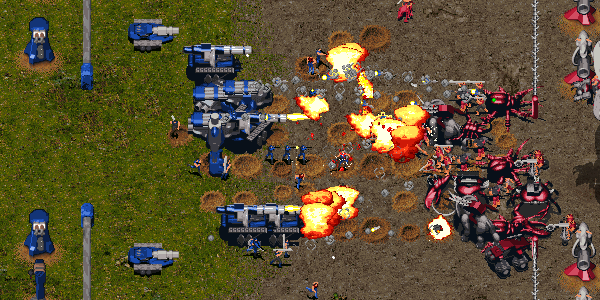 Those unlucky to survive the destruction of the great nuclear war were mutated by radiation and viruses.
The so-called Evolved found their way back to their spiritual roots to make sure this never happens again.
When the Survivors emerged from underground 60 years later, the two factions battle to control the overworld.

The KKnD remake began in 2011 before making the move to OpenRA in 2016. The team has been working hard since then to develop KKnD’s unique game mechanics (such as the upgrade and parallel construction systems) and integrate many code improvements into the OpenRA engine. The classic KKnD gameplay is enhanced with many small tweaks and quality of life enhancements to meet modern gameplay standards.

The first alpha releases focus on KKnD 1 multiplayer gameplay. The team plans to focus on skirmish games next, before turning their attention to the singleplayer campaigns and the sequel KKnD 2: Krossfire.

See their official release announcement for more information and their download page to try it for yourself!