We are proud to announce the June 2015 release of OpenRA!

As promised, it was our goal to reduce the length of this development cycle, and we succeeded! With about 22500 changed lines in just over 300 commits by a total of 25 developers since the last release, the list of new features is naturally a bit shorter than last time around, but it contains some good ones!

The standout feature of this release is of course the long-awaited in-game map editor. For the first time ever, we are offering a map editing ability for all our mods, on all supported operating systems. You can access the map editor from the “Extras” sub-menu of the main menu.

The new map editor offers the following benefits and features:

Compared to the legacy editor, there is not yet full feature parity: the in-game editor is missing cut-and-paste operations, a display of the sum of resources on the map, and also does not show the coordinates of cells. These short-comings will be rectified in future releases. Meanwhile, they remain available in the legacy editor, which is still being shipped with this release. It will, however, be removed in the not too distant future.

Complementing the new editor is an improved map chooser dialog, which now separates official and custom maps. It also allows deleting one or all of your custom maps. We also took this chance to add the often-requested ability for all players to view the map chooser from the game lobby (but changing the map still remains the prerogative of the host).

Another new feature with a lot of potential is the added operating system integration of OpenRA. The installers will associate the game with OpenRA replay files and OpenRA server URLs. These will allow websites hosting replay archives to add one-click watching of replays, and creating alternative server browsers. As an example, our own web-based server browser has been enhanced to offer clickable links to waiting games that will automatically start OpenRA and connect you to the server. You can also create bookmarks to your favourite OpenRA servers on your desktop! These associations are available on all supported operating systems as well.

Other minor additions include:

Aside from new features, the usual number of bug fixes has found its way into the code. Among them is a fix for a high-profile bug that caused the inability to undeploy construction yards. Several graphical problems, from glitches in the menus to occasionally missing mouse cursors have been resolved as well as issues in our single-player mission scripts.

Take a look at the full changelog for all the gory details.

Grab the installer now for your operating system from our download page! We hope you’ll enjoy this newest installment of OpenRA! 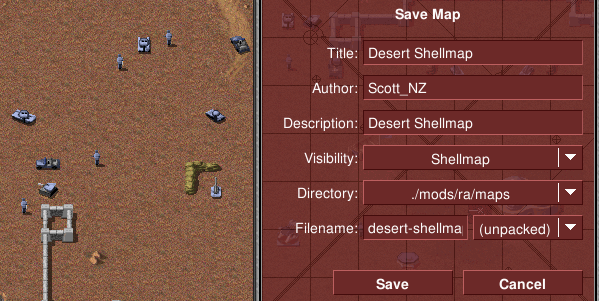 The new map editor was almost 18 months in the making! 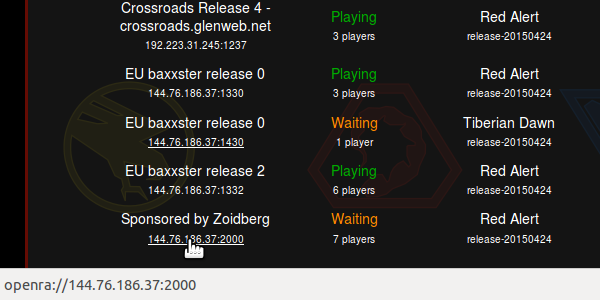 The added operating system integration allows connecting to games from links on websites or bookmarks. 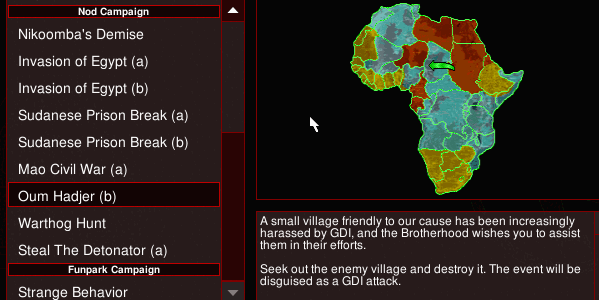 The work on our single-player campaigns is progressing nicely.
The Nod campaign is now almost half done! 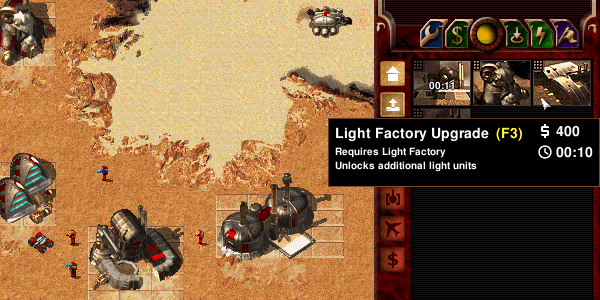 Building upgrades have been added to our Dune 2000 mod,
which now allow us to almost match the original game’s tech tree.