Archived News » Another playtest hot off the presses!

We are happy to present to you the second playtest in this release cycle!

Many users – indeed more than we anticipated (over 2000!) – have tried out the first playtest and gave us a lot of feedback. Almost inevitably, a number of bugs were reported (thanks to all the testers who took their time to do so!).

We have now fixed all of those issues, including:

Additionally, the Red Alert mod has seen more refinements to its map pool: a few lower quality maps have been removed, while some new tournament-grade maps have been added.

As usual, the complete list of changes can be seen on our wiki.

We promised in the last news post to detail the new map format and other map-related changes here. Skip to below the break for the full scoop.

Installers for all supported operating systems are available from the download page. Of course we are still interested to hear about any bugs and issues you come across, so please don’t hesitate to report them on our bug tracker, in the OpenRA IRC channel, or here in the comments.

At this point we’d like to address a topic already mentioned in the previous news post. In order to get a better understanding of the composition of our user base and the way our software is being used, we decided to add an anonymous, opt-out data gathering facility to OpenRA. When enabled, the game will send us a few technical details about your system. There was some controversy over this feature during the first playtest, so we would like to reiterate that this only sends the following:

If you are uncomfortable with this, you can disable this functionality by unchecking the “Send System Information” checkbox in the advanced settings dialog, manually editing your settings.yaml file, or starting the game using the Debug.SendSystemInformation=false argument.

The initial results from the first playtest have been promising: the vast majority (approximately 99%) of players are able to run the newer .NET runtime platform that we are hoping to make our minimum requirement in a future version. This means that we will be able to take advantage of new platform features to improve performance, identify bugs, and improve operating system integration without leaving many players behind. We also find that 40% of our players do not use English as their primary language, which suggests that it may be worthwhile for us to focus on translation support in a future OpenRA release. Of course, we realize that our playtesters are a biased sample of our overall player base, so we will wait for results from our next release build before we make any final decisions. 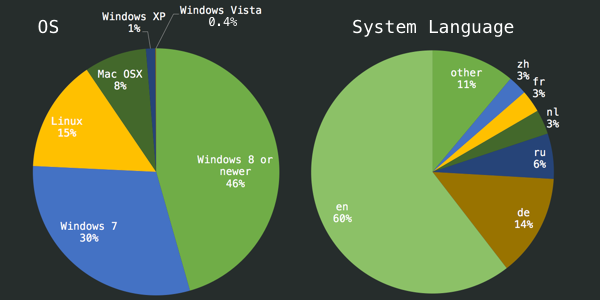 This is the share of operating systems and languages among playtest users.

Custom maps are now stored in an additional sub-directory per mod version (e.g. My Documents\OpenRA\maps\ra\playtest-20160403 on Windows).

To ensure that outdated maps will not cause problems during gameplay, these maps will not be automatically moved when you upgrade the game. You will have to download updated versions from the Resource Center instead, or upgrade and move them yourself (see below). Note that the maps from the first playtest are compatible with this one (and will very likely also be compatible with the final release), so you can just copy them over, or rename the directory.

In previous versions (up to release-20151224), the game used to automatically update maps with earlier map formats to the latest one supported by that version. As of playtest-20160403, this is no longer the case. To update maps, you have three options: 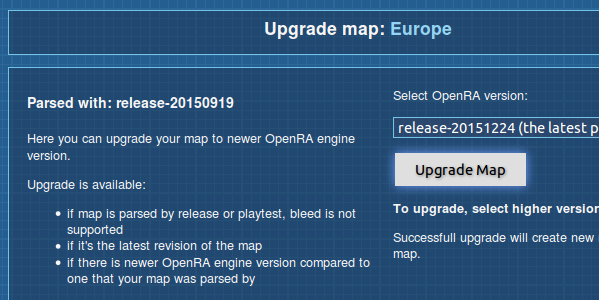 The new map format brings with it a couple advantages:

One noteable change that needs explanation is the removal of the Description:, Options:, and Videos: blocks, whose properties have been moved to their corresponding traits. During map upgrades, these translations will happen automatically. Take a look at one of our single-player missions and the Fort Lonestar map to see how these work now, or search for the following traits in our trait documentation:

A more in-depth description of the map format and the various YAML fields is available on our wiki.