The current release has been out for almost three months now. Time to take a look at some statistics!

At the time when this post was drafted, there have been a recorded 53953 downloads of the latest release from the official OpenRA homepage. Not unsurprisingly, most downloaded packages are for the Windows platform (almost 75%!), with Linux being a distant second at 13% and OS X coming last with the remaining 12%. It is notable that the shares of both Linux and OS X are much larger than their respective share of the desktop market.

When launching OpenRA for the first time, players get greeted by a question whether to send system information back to the OpenRA project — the very data which is used to compile these statistics! Of these more than 50k downloads, almost 22,000 individuals (thanks to every one of you!) opted in to this data gathering, which comes out to about 40%. 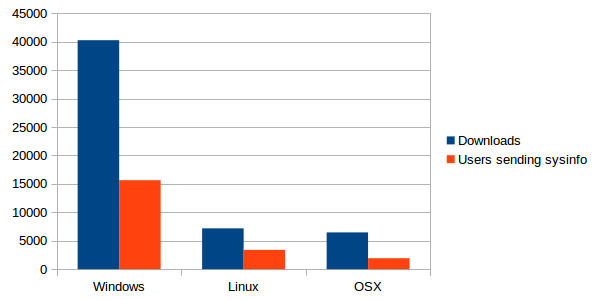 While we know that many use third-party sources such as PlayDeb for their downloads,
the download count from our official site is the only hard number we can rely on. 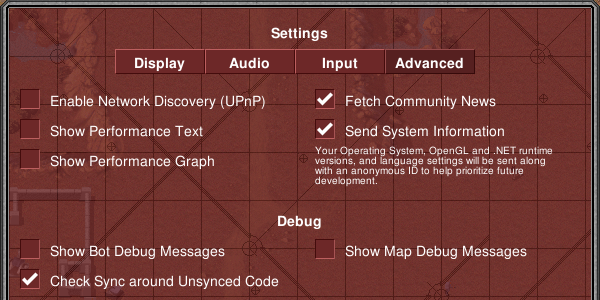 If you like this post and happen to have OpenRA configured so that is doesn’t send system information,
you can easily re-enable it in the “Advanced” tab of the settings dialog.

When the game is allowed to send system information, the time of the last update is recorded in our database. Thanks to this, we know that about 5,000 users have played OpenRA in the first week of 2017. This also allows us to see how “loyal” players are to OpenRA in general: 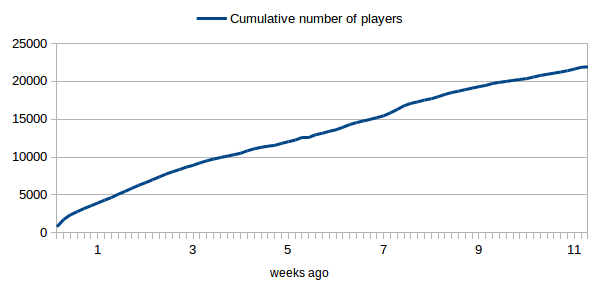 It is an unfathomable idea, but it sure looks like there are users who don’t play OpenRA every day!

We can also get a general idea of the composition of our player base by looking at the language settings that get sent back to us. As expected, the vast majority of players use English (~57%) as their primary language, followed by German-speaking people (16%), which combined make up almost three-fourth of all our users. Surprisingly, the relatively small Netherlands come in at third place with 4.5% of the total. Also noteworthy is a quiet Chinese minority of ~2% at seventh place. 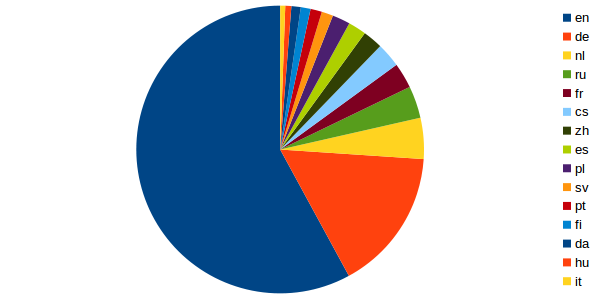 It is no big secret that Red Alert is the most popular mod, but just by how much? Here’s the answer: 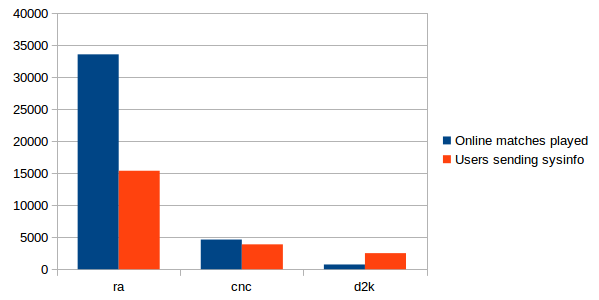 Since system information is also sent by people who are not playing online matches, the obvious conclusion here is that Tiberian Dawn and Dune 2000 players are much more invested in single-player and/or skirmish games against the AI.

Another interesting way to look at this data is to find out which mods are popular in which countries: 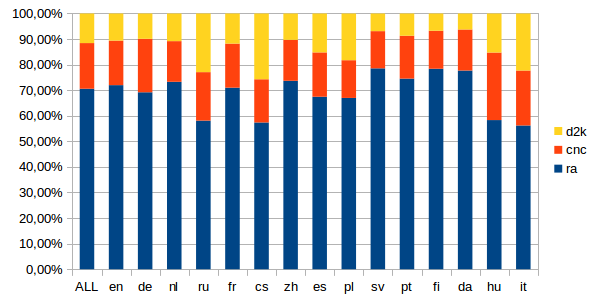 Dune 2000 has a relatively larger following in Russia, the Czech Republic, Poland and Italy,
while the Scandinavian countries are deep in the Red Alert camp.
Tiberian Dawn is stronger in Hungary and Italy.

The OpenRA master server also records the maps on which online matches are played. The top ten most popular ones are these: 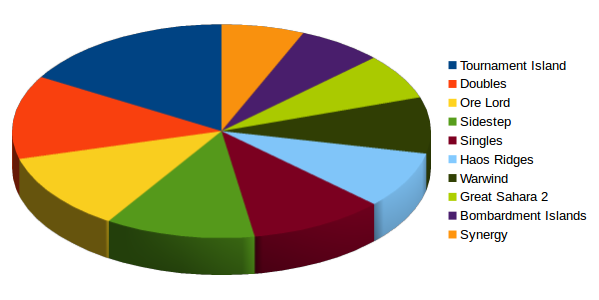 Here is the complete list of the top 40 (well, top 38) maps, all those with more than 250 plays. Red Alert’s dominance is again felt here, as every single one of those maps belongs to that mod.

Personally, I find immense joy in the fact that two of the three multiplayer cooperative missions
that have been added in the last release found a spot in the top 40!

To round off this post, let’s look at the length of OpenRA online matches. The average length is 24 minutes and 18 seconds. There is a little bit of variation between mods, as can be seen in the graph below. 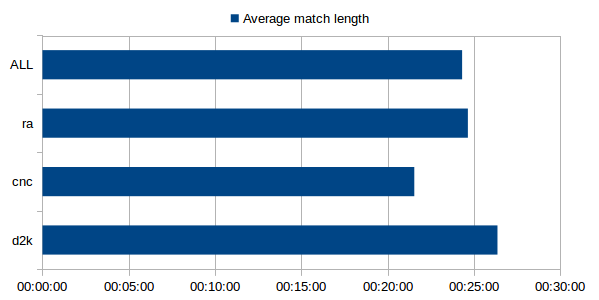 The faster-paced Tiberian Dawn with its shallow tech tree has shorter matches on average,
while the slower gameplay and sprawling tech tree of Dune 2000 lead to longer games.

Now, there are a surprising number of very long matches in our databases. A total of 124 matches lasted longer than three hours, and 29 of those even longer than six hours. The longest game — by a wide margin, I might add — that was recorded on our servers was a match amongst four players (and one spectator) on the Red Alert map Doubles that lasted one day and eight hours. Yes, you read that correctly, a 32-hour match.